HE HYPNOTIZED ME on WEDNESDAY NIGHT!

To start at the beginning: Though I never tried hypnosis when I was studying at university (people think that the first thing a psychology student learn is how to hypnotize J ) now I know what people feel when hypnosis puts a person in a hypnotic state.
Yes, I waited him sitting for one hour and a half, and I never complained. At the end of 1.5 hour I was in trance (that I wished it would have been the deepest one that would never make me up) in each second of yesterday night. Yes, finally, I was in Mario Frangoulis’ concert... 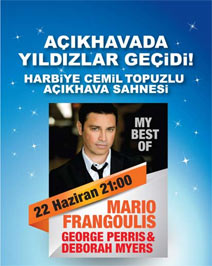 I had contemplated to go to listen to him in Greece and knowing that I never get fed up of listening to his songs, hopefully I will do that (You may think that I’m crazy (and I am), I can do that even this summer!) The thing I felt yesterday night I was so thirsty and drank only a glass of water, but still felt so thirsty. So I may go to Athens (most probably he would give the concert in Acropolis) just to listen to his concert for a couple of hours.
The songs had already been listened so many times before I went to his concert, and only 2 or 3 Greek songs were so new to me. But the funniest thing I did was trying to hear the Greek words I was familiar with J When he said “spitia”which means homes, I was like “Oh he’s singing about homeeees!” Hahaha J or when he said “dendro”which means tree, I was proud of myself as I understood couple of words finally. Btw some words in Greek are really no need to learn as in psychology jargon we use a lot of them a lot such as “dendrit” in brain, or the term “oedipus ”complex etc...
His voice is great but I don’t listen to him because of his splendid voice . He’s from Corfu (one of my dream islands in Ionian Sea) but I am not fan of him because of this too. He sings well-chosen fantastic songs such as Vincero’ Perdero’, Notte di Luce, Hijo de la Luna, but some other singers sing them too and I am not really fan of them. He’s well-educated, but this could be the strangest reason to listen to a singer J Or because of he has always been very much loved? No no no... Because he adds certain elegance when he sings? No, he is not the only elegant person I’ve ever met.
The thing I’ve learned in this life is honesty, grace and generosity of spirit are essential ingredients to the well-lived life worth living. The reason I appreciate him a lot is he represents a best of “humanity” for me which is rare to meet in such a chaotic, materialistic and, capitalist life. If you listen to the interviews which have been done with some other popular singers have known him well, you will understand what I really mean.
These are what I listened from some interviews:
“... he is very generous, very beautiful both appearance and the heart, of course he has a great voice but I think the most special thing is he is very beautiful human being.” Lara Fabian
“... I adore him I think he has a great character, and such a beautiful voice... a timeless voice!” Justin Hayward
As I observed him singing in his concerts and the TV programs and in his interviews, I didn’t need any of these praises to adore him indeed. The reason I published the thought above is I would like to draw your attention to the order of their praises: both are in the same order. When I heard others’ thoughts about Mario, the outstanding feature of his character was that of humanity: his honesty and loyalty in his life, and finally passion. Mario is just not a good looking 21st century tenor, but he’s the best combination of the great features above: a role model for both current and next generations. I now don’t know what caused Mario to be that good combination. Maybe because he was born in the heart of the Africa and saw the poor and the rich, lived north and the south, or maybe he was sent to Greece by his mother when he was only four. Whatever the reason is, it seems life has made him mature and I totally adore this final Mario! When I watch him I feel like I look at a mirror, that’s why I love him…
I have a very strong wish, from the bottom of my heart: I want so much all very dear people in my life, and whoever deserves, to have “a Mario” in their life, that sincerely smiling, that honest, that successful, that beautiful, that passionate, and that loyal.

Thanking him once again for making us live a fantastic night I must confess I already feel so excited for the next concert!

Before I finish I would recommend you to listen to his song that I might have listened to a thousand times http://www.youtube.com/watch?v=GfIDo6Bnjz4 .

With my very best wishes...